Made in the USA – Why Buy American?

When you are about to make a purchase, do you ever ask yourself, “Is this American-made?” Perhaps you should. You have no doubt heard people go on about how important it is to buy products that are “proudly made in USA.” Many studies are conducted on this topic in the hopes of coming up with facts and figures to persuade people to “buy American.” Distinct rules have been laid out and laws put in place detailing the conditions by which a company may declare that its product is “Made in America” and the penalties for making false claims.

Why all the fuss over a simple statement? Surely this is not simply a matter of national pride. When dire factors such as personal safety and economic security are weighed in, the gravity of the situation starts to become evident. It is not just something veterans and politicians act on for the sake of sentiment or affiliation.

How Seriously Is It Taken?

If a company is found to be misleading consumers – even slightly – into thinking that its product is American-made (by, say, adding a U.S. flag or the outline of our nation onto its packaging), they will be found in violation of the Made in USA standard and must answer to the Federal Trade Commission. Charged with protecting consumers’ rights for over one hundred years, the FTC will determine the extent of the violation and enforce that the company take action to rectify its mistake. Repeated offenses may carry heavy fines.

So why do some companies risk making false claims? For starters, companies are expected to follow the rules independently, and the FTC doesn’t actively inspect claims without good reason and relies on consumers to report to them when they believe companies are being fraudulent. Plus, when you consider how a recent Consumer Reports survey showed that nearly 80% of American consumers prefer to buy American – and over 60% would purchase a higher-priced item that is American-made over a cheaper one that is not – it becomes apparent why a company might chance it. 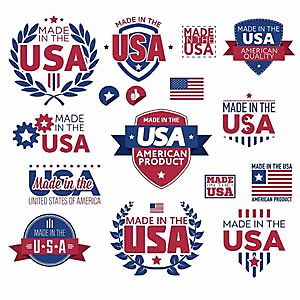 What makes it difficult for the consumer is that there is no set label that identifies something as being all-American. Companies may create their own stickers and logos, and there are different distinctions between content and manufacture. Certain conditions will allow a claim of being “Assembled in USA” without additional mention of its inclusion of foreign parts. And even products with legitimate Made in USA claims may contain a small amount of foreign material in their construction.

Look for iconic American imagery on packages or ads that show when a company is trying to promote its dedication to American commerce, and learn to identify when added wording in the logos reveals certain exceptions they are trying to slip by the public eye. This will help you commit to buying American without uncertainty.

But Why Should I Buy American?

There are many reasons given for why it benefits Americans to stand by their nation’s manufacturing, but it really boils down to the healthy condition of three vital factors of everyday life: the individual, the environment and the economy. These three aspects, the modern day equivalent of life, liberty and the pursuit of happiness, must be preserved in order for future generations to be able to enjoy the type of untainted lifestyle we strive to provide for them. Green label with 3D text and check mark. Part of a series.

Havahart® Does Its Part

Understanding the importance for America to look after its own, Havahart® helps contribute to the health of our nation by manufacturing nearly all of its animal traps domestically. With over seven decades of experience selling animal traps, Havahart® sees the value of producing locally and manufactures many of its products in Pennsylvania, one of America’s most historically relevant states.