Muskrats are unique, semi-aquatic rodents named for the musky smell and rat-like appearance. They're known mostly for their destructive burrowing in ponds, streams and dams, but there's more than this to these large wetland-dwelling mammals. Below, learn all about muskrats, including interesting facts and important habits that can help you control their damage. 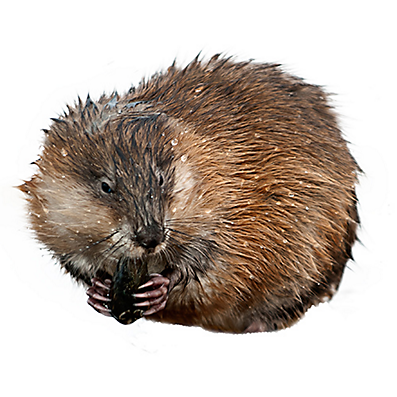 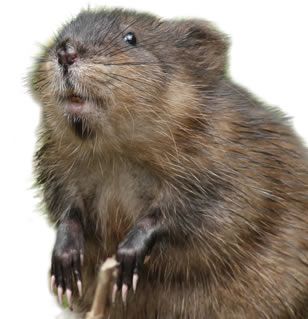 Average Lifespan in the Wild: 1 - 3 years 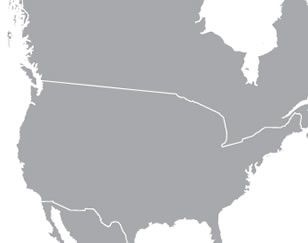 Muskrats are native to North America, with a range that extends from Canada, down to some northern parts of Mexico. They have also been introduced to Northern Europe, Asia, and South America - mainly for their valued pelts. 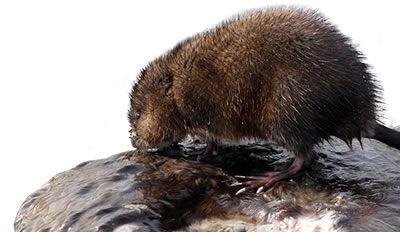 Muskrats are semi-aquatic mammals that inhabit areas abundant in water like wetlands, ponds, lakes and marshes.

Muskrats are omnivores, but they mainly enjoy a plant-based diet consisting of the roots, stems, leaves and fruits of aquatic vegetation. As local plant food becomes scarce, muskrats will feed on small aquatic animals such as insects, fish and amphibians. Freshwater mussels often become a dietary staple in the wintertime.

Activity: Muskrats are active year-round, and they feed at all times of the day. They are most active at twilight.

Reproduction: Females give birth to 2-3 litters per year, each time yielding an average of 4-8 pups. The size of the litters varies with the seasons, with larger litters being born in spring and summer, and small litters being born in winter. In warmer months, muskrats can give birth to as many as 15 young at once. Newborn muskrats are weaned for about a year before they become independent.

Feeding: Muskrats gather food within their territories and carry it to feeding platforms on which they eat. These feeding platforms are flat, elevated piles of mud and vegetation, which muskrats construct outside of their living dens.

Social Interaction: As monogamous breeders, muskrats live with their mates and their young. They are very territorial - especially during breeding season. 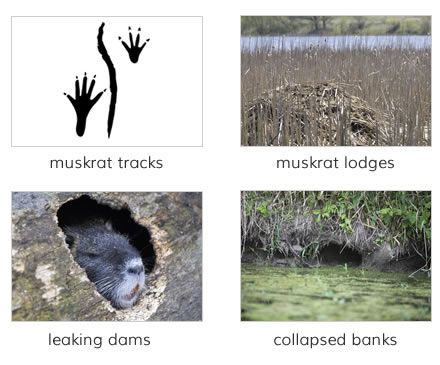 Muskrat damage occurs as a result of their burrowing habits. Oftentimes damage is not very obvious until severe destruction occurs, which is why it's important to understand how to identify muskrat burrows and other warning signs.

Signs of a muskrat's presence or damage include:

Muskrats are carriers of some diseases that may be transmitted to humans and/or pets through a bite, drinking contaminated water, or coming into contact with muskrat flesh.

The most serious illnesses include:

Muskrats are excellent swimmers, thanks to their webbed back feet, laterally flattened tails, and the ability to hold their breath underwater for 15-20 minutes. They can swim backwards and forwards.

Most of the time muskrats mate underwater.

Known to be most valuable for their fur or pelts, muskrats are one of the most trapped animals in history.