This is "Wobbly" and a poster child for the reason to NEVER assume that an animal is sick just because of the way they walk!

About 5 years ago a Momma Raccoon brought up 4 babies and we noticed that 2 of them seemed to walk a little slow, while a third lagged behind and would take a step or two and then fall down. At first, we attributed this to the fact that this little girl might just be so young that he she had not developed her sea legs yet, but as the days and weeks went by we noticed there was very little to no improvement. I knew it could not be rabies since she was not sluggish nor aggressive and had this problem too long already.

One day I walked out the door to feed them and Momma and her children were up by the deck and I guess I startled her as she took off and all of the children ran with her. Little Wobbly tried, but kept falling down so she climbed a tree, only going up about 5 feet. I walked up to the tree and could have reached out and petted her but she was scared to death and looked frozen from the fear of what I was going to do next so I just talked to her for about 10 minutes, then slowly backed away from the tree. There have been times I wish I would have picked her up or at least tried and then just held her close, but I still believe what I did was the right thing to do and it probably alleviated her fears.

I have an extremely hard time watching an animal that has an injury and even now 4 -5 years later I just cringe when I see Wobbly take a step or two and fall down and even sometimes rolling over from the fall. She comes up every single night to eat and I KNOW that she would not have made it in the wild had we not fed her all of these years and of course that gives me satisfaction. She has grown into a BEAUTIFUL raccoon with wonderful coloring and an extremely mild temperament.

I have contacted colleagues, friends, experts, zoos and just about anyone that I think might know about this condition and yet not one soul has ever heard of it. However, we have come to the conclusion that it is a genetic trait because in the past 4 years there have been several more little “Wobblys” each spring that are her children, though none of them have this as bad as Wobbly does. We have also noticed that none of the other grown raccoons bother her or become offensive to her, so I am convinced that in the raccoon kingdom, they recognize that she has a disability and they leave her alone.

We have noticed that when she walks and even when she stands as you might be able to see in my photo, she stands on her tiptoes and almost never puts her feet flat on the ground. Just about every time I see her walk and fall, I just want to run outside, pick her up and tell her "it is OK, and I am here for you!" and give her a big hug...but when she sees me looking at her and I speak her name, there have been times that I think I see a little twinkle in her eyes and a bit of a smile, telling ME...she knows, and it IS OK!!!

Her name is Wobbly and she is a sweetheart!!

I Woke Up to Find A Raccoon in My Bedroom 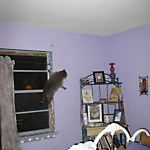 I feed (and fix when I can afford it) feral cats….which brings raccoon family after raccoon family to my nice back yard, but I’d never had a raccoon in my house. I recently tried to get a very friendly small cat/kitten to come in by leaving a teeny little opening in my bathroom window overnight as the cat/kitten would sit up on the outside ledge as if it was ready to come in and be part of my family.

Low and behold, at 4 AM, I woke to a scuffle sound and a nice beautiful raccoon hanging from my bedroom curtain rod! My small terrier was still alive – he's now passed on—but didn't move an inch and none of my other cats, who were lying on my bed, moved. I wondered if they even knew there was a raccoon in my house!

I got my cell phone to call Animal Control, who came within just a few minutes. The police officer who showed up first was too frightened when he realized there was a raccoon in my house, so stayed in his squad car till AC came and got the poor guy with a hoop catch thingy. They were very kind and didn't hurt my little raccoon but warned me they would have to charge me if this happened again and to keep my windows closed. They also suggested using a Havahart® Large 1-Door Easy Set® Trap to humanely capture the critters if they continued to be a problem.

I felt as though I could have just invited that little raccoon into my house to spend the night and crawl into my bed with the rest of us. I still feed Rocky (his new name) each night and my ferals have learned to give him or her and the family space. They take turns eating and many nights Rocky will eat out of my hand while the ferals have their dinner nearby.

I tried to trap him once but he was too smart so we just work around each other now. I love my outdoor animal family. I do need to trap some of the new feral cats though to get fixed as SPCA has me listed with the catch and release program to cut down on any new spring litters. I find the Havahart traps very easy to use, set up and transport my troops in!!