Beavers are large, semi-aquatic rodents with an extraordinary ability to use their environment to create entire ecosystems. Learn about these fascinating animals below, where you'll find information on their geography, diet, behavior and more. 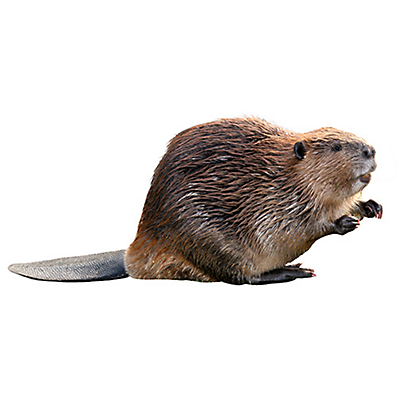 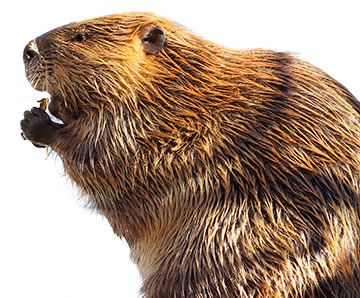 Average Lifespan in the Wild: 10 years 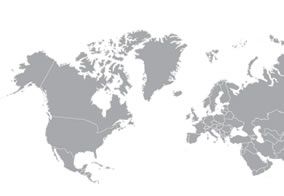 North American beavers inhabit most of the continent, excluding Mexico and coastal regions of Florida and California. They are also found in Argentina, Russia and Finland.

Scattered throughout other parts of Europe and Asia is the Eurasian beaver - a very close relative of the North American beaver. These beavers differ slightly in physical appearance but live and behave quite similarly. 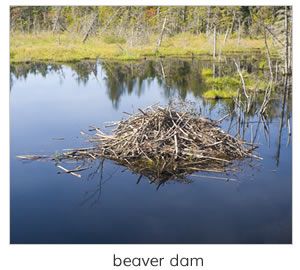 Because of their unique ability to manipulate a landscape to create a suitable habitat, beavers can thrive in a variety of environments. Beavers might make their homes in natural habitats like ponds, marshes, rivers and wetlands or manmade ones like irrigation ditches and wells. Once they select a habitat in which to settle, beavers will construct intricate dams, lodges and canals to transform the territory into their ideal ecosystem.

Beavers are vegetarians with a strong preference for particular varieties of trees and woody plants. They feed on the leaves, twigs and inner bark (cambium) of trees. Their favorite trees are poplar and deciduous varieties. In addition to trees, beavers feed on herbaceous and aquatic plants, shrubs, roots and crops.

Activity: Beavers are nocturnal. Each night for about 12 hours, beavers are "busy" building and maintaining their habitat. Although they do not hibernate, beavers tend to be slightly less active in the cold of winter.

Reproduction: At about 1.5 years of age, beavers begin to reproduce. Mating begins in late December, and gestation lasts about 128 days. Between March and June, a female beaver will give birth to 3 or 4 young.

Feeding: Food is gathered up to 150 yards from the water's edge. Beavers often will use their strong, ever-growing teeth to cut down trees just to access the smaller branches, which they prefer. When dining on other vegetation, beavers clip plants at the roots.

Social Behavior: A colony of beavers lives together within a home range spanning about 1/2 mile long. Beavers communicate using vocalizations, body language, scent marking and by slapping their tails against the water.

Territory Marking: Beavers are territorial animals. They mark their territories by building piles of mud - or castor piles - on which they secrete an odorous substance called castoreum (or castor). 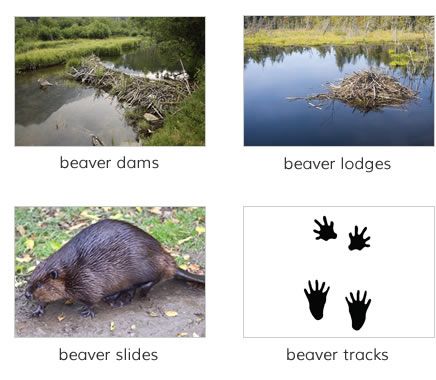 Beaver damage is usually a result of their cutting down trees, flooding, building dams and digging out bank dens. The habitats beavers create are typically very beneficial for other nearby wildlife, but this beaver behavior may also result in flooding of homes, irrigation systems and valuable trees.

Signs of beaver damage include:

Although beavers are not major threats to humans, they can transmit illnesses like tularemia and giardiasis (beaver fever). Bacteria that cause tularemia and parasites that cause giardiasis are generally transmitted through direct contact with infected feces, drinking contaminated water and via fleas/ticks.

Beavers are the largest rodents in North America and the second largest in the world, behind the capybara - a species native to South America.

The enamel of a beaver's front teeth wears away quicker than the rest of its teeth, maintaining a sharp edge that allows them to cut wood.

Beavers gnaw on trees not only for nourishment but also to wear down their teeth, which never stop growing.

A beaver's long, flat tail serves many uses. Beavers use their tails as rudders to steer in the water while swimming, to prop them up for balance when sitting, as leverage when carrying large branches and logs, and to slap the water as a warning signal.

A single beaver may cut down as many as 200 trees in one year.

Beavers have extra eyelids that allow them to see underwater while protecting their eyes.

How to Get Rid Of
How to Trap
Baits