“Beep, Beep!” While the Road Runner didn’t have much else to say to Wile E. Coyote, he frequently displayed his ability and intelligence when outwitting his foe in the Warner Bros. cartoon.

Many Americans grew up watching the animated rivalry and constant duel between Wile E. Coyote and the Road Runner – making it one of the most classic confrontations of all time.

To revisit the far-out efforts between these two timeless characters, we studied the 40 main episodes created over the show’s history to see just how far Coyote was willing to go to capture the Road Runner, and just how short (or far) he fell. Want to know how many ACME products Coyote purchased over the years – and what they might have cost him? Continue reading to find out. 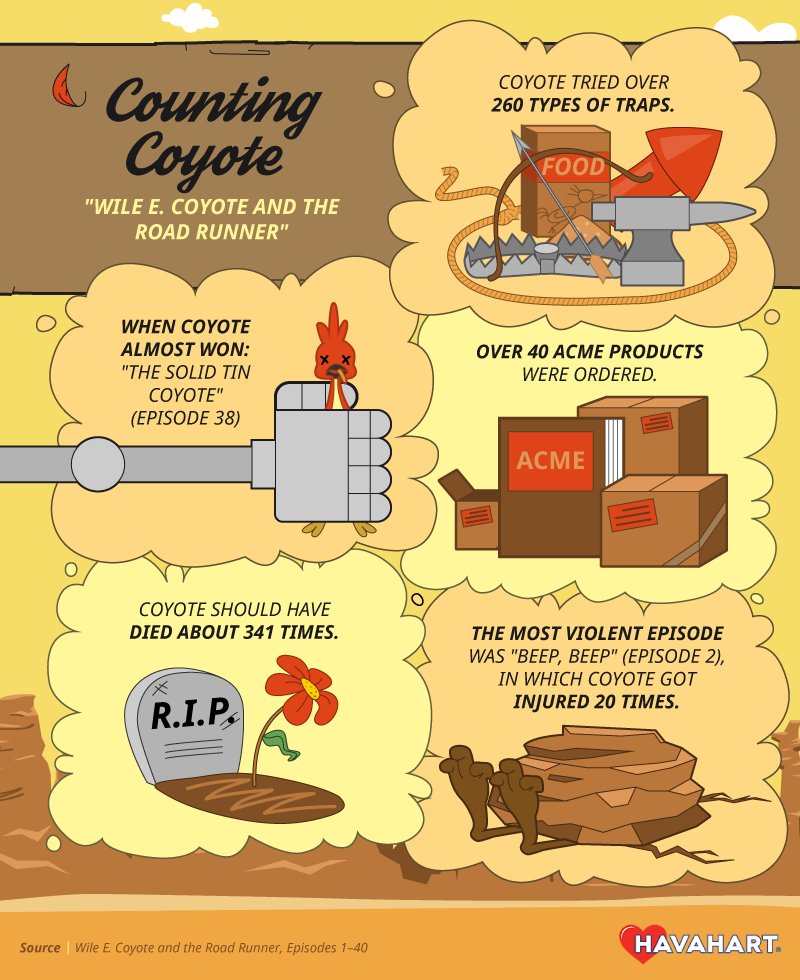 Chuck Jones, the creator and animator behind “The Road Runner,” had nine guidelines in place for how Wile E. Coyote and the Road Runner interacted in the series. They included Rule No. 7: All materials, tools, weapons, or mechanical conveniences must be obtained from the ACME Corporation.

In the 40 episodes examined, Wile E. Coyote procured over 40 potential solutions from the ACME Company, but none seemed to do the trick. With over 260 traps deployed throughout the episodes, including many made by hand or not affiliated with the ACME brand, Coyote always ended up empty-handed. In retrospect, perhaps he should have looked into the store’s return policy or a different vendor after the first of many failures.

Wile E. Coyote couldn’t manage to outsmart the Road Runner, but he did find a way to cheat death. In over 341 instances, the Coyote survived fatal incidents while trying and failing to capture the Road Runner time and time again. He also exceeded the average life expectancy of a wild coyote, which in reality is six to eight years, on average. 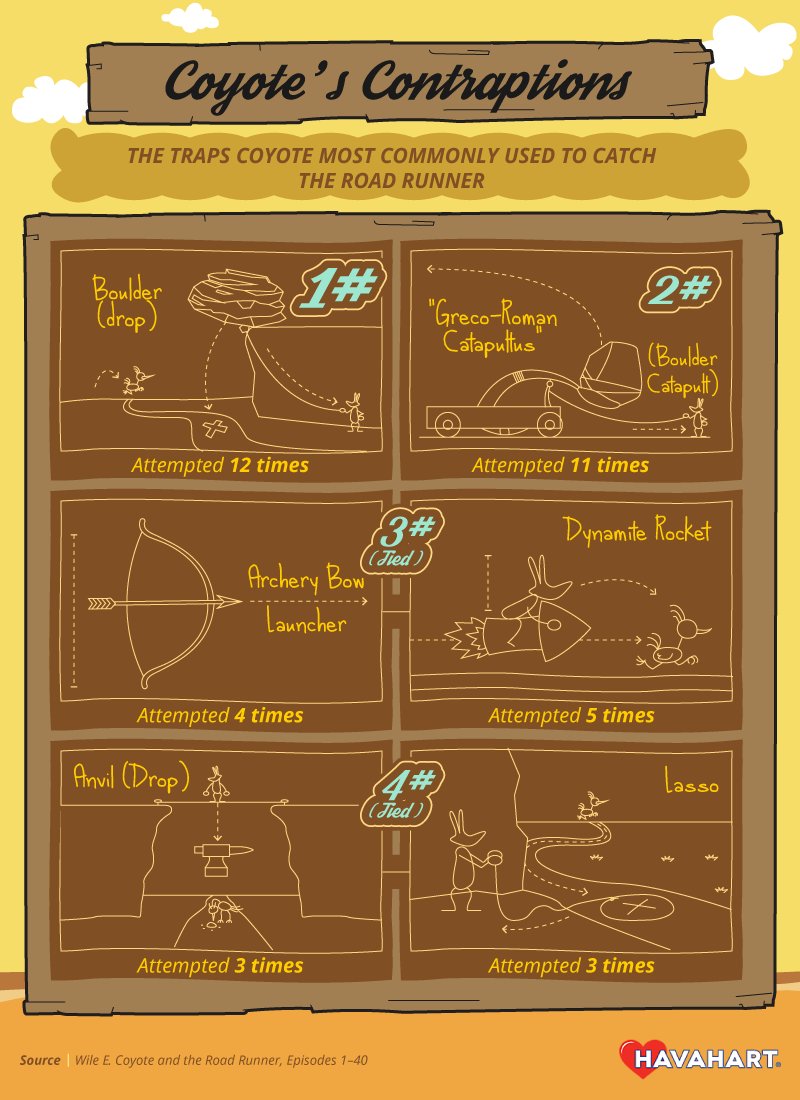 Another of creator Chuck Jones’ rules was that “all action must be confined to the natural environment of the two characters – the Southwest American desert.” Given this guideline, Coyote’s repeated use of boulders and gravity makes more sense.

In fact, Coyote used a boulder by itself or with a catapult more than 20 times to try to capture the Road Runner. Together, these efforts finished ahead of the other four observed methods combined – but none was good enough to get the job done.

Other popular ACME Corporation products he used were the bow and arrow and the dynamite rocket. But again, even this change in weaponry couldn’t change Coyote’s fortunes or the Road Runner’s incredible luck. He was less likely to use an anvil or rope when attempting to catch his nemesis.

Making the Best of a Bad Situation 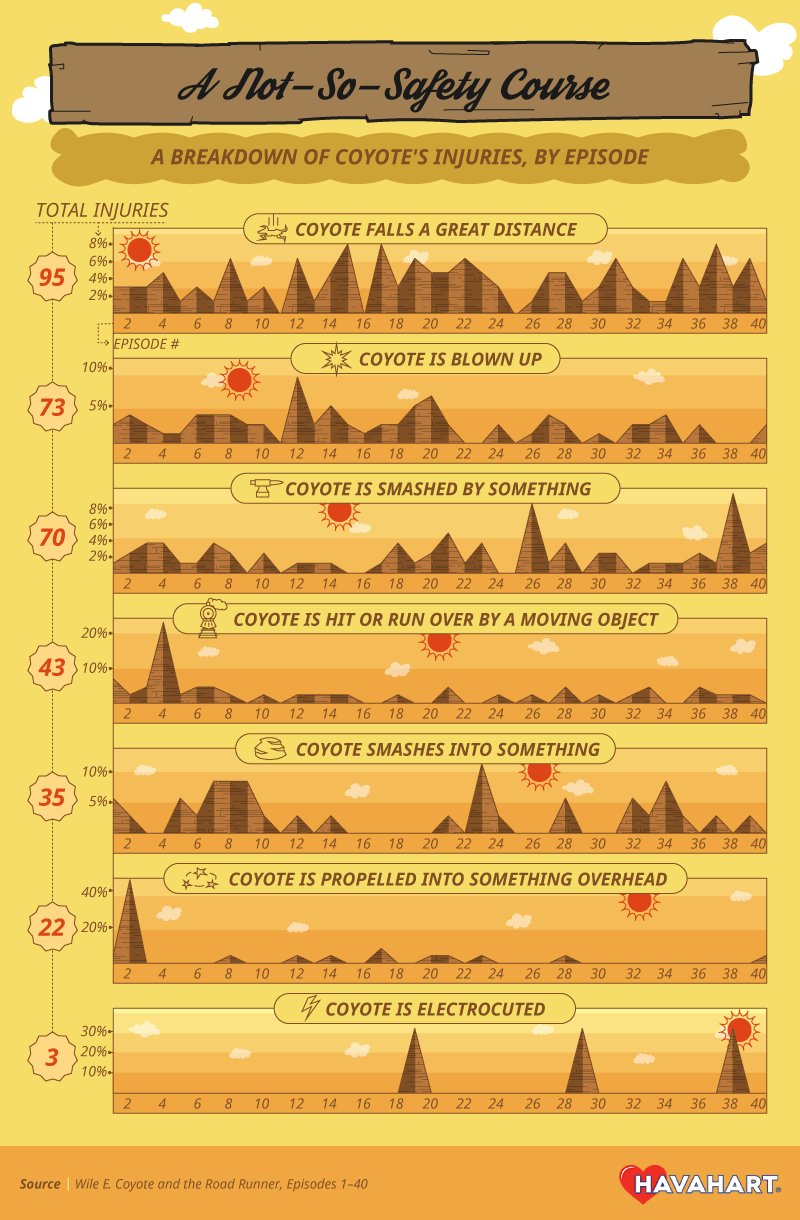 Just because Wile E. Coyote appeared impervious to his own efforts doesn’t mean they were without consequences. While none of his attempts ever resulted in the capture of the elusive Road Runner, Coyote did seem to cause damage to both himself and the environment around him over the course of the show.

Falling a great distance – while usually holding up signs or props for comedic effect – occurred 95 times over the show’s history. Gravity wasn’t his only enemy, either. Wile E. Coyote was smashed by something (including rocks and boulders) 70 times and smashed into something (also usually rocks and boulders) 35 times. Just in case you thought you could take the battle between Road Runner and Wile E. Coyote seriously, Coyote was blown up a total of 73 times. If ever there were an example of violence not always being a good answer to our problems, this would be it. 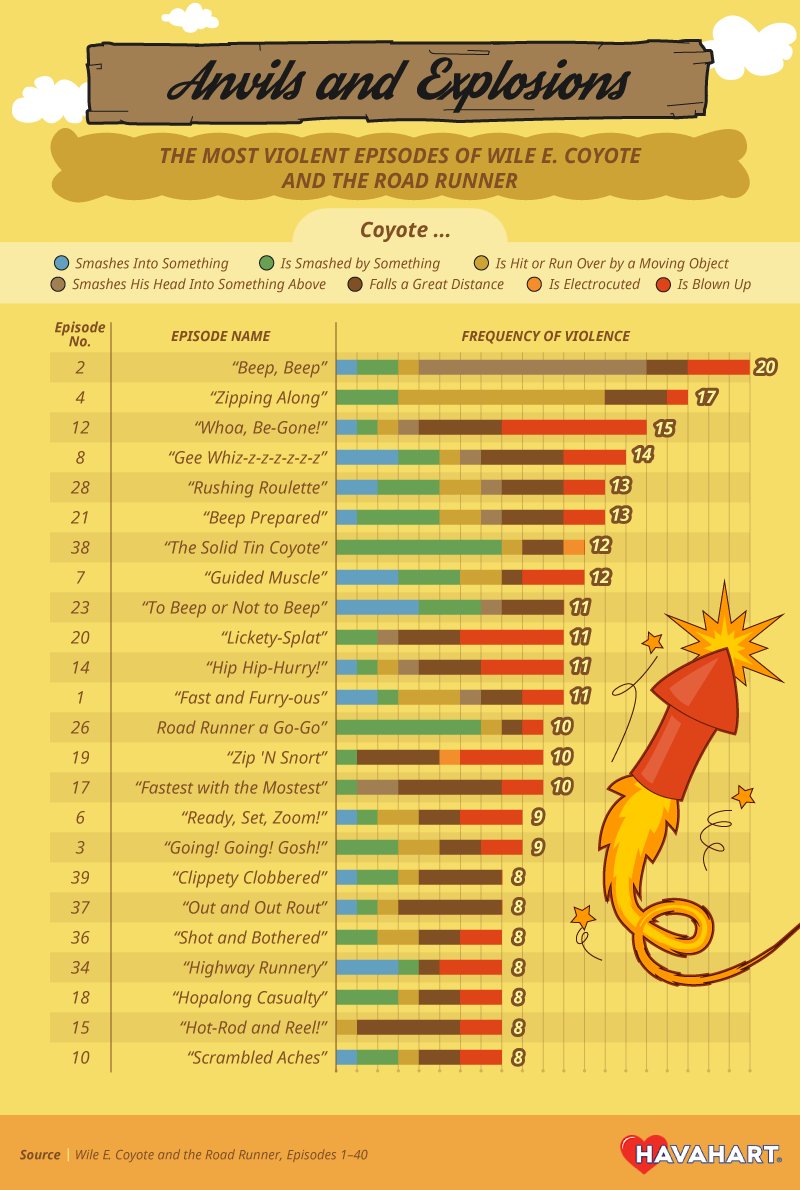 As it turns out, some episodes of Road Runner were less tempered than others. The second episode of the show’s run, “Beep, Beep,” – which originally aired in 1952 – was the most violent episode in the history of “Wile E. Coyote and the Road Runner.” With a little bit of everything, “Beep, Beep” showed Coyote smashing into something (by way of his own failed rat trap), being crushed by something else, getting run over, beating his head into something, falling a great distance (a product of an anvil on a tightrope), and being blown up.

The show’s fourth episode, titled “Zipping Along,” wasn’t much more subdued and featured explosive ACME products, such as a bomb, grenades (which Coyote attempted to use as ear plugs), and mouse traps.

Other episodes, which aired between 1956 and 1965, including “Whoa, Be-Gone!” “Gee Whiz-z-z-z-z-z-z,” and “Rushing Roulette,” were also among the most violent episodes of the show. 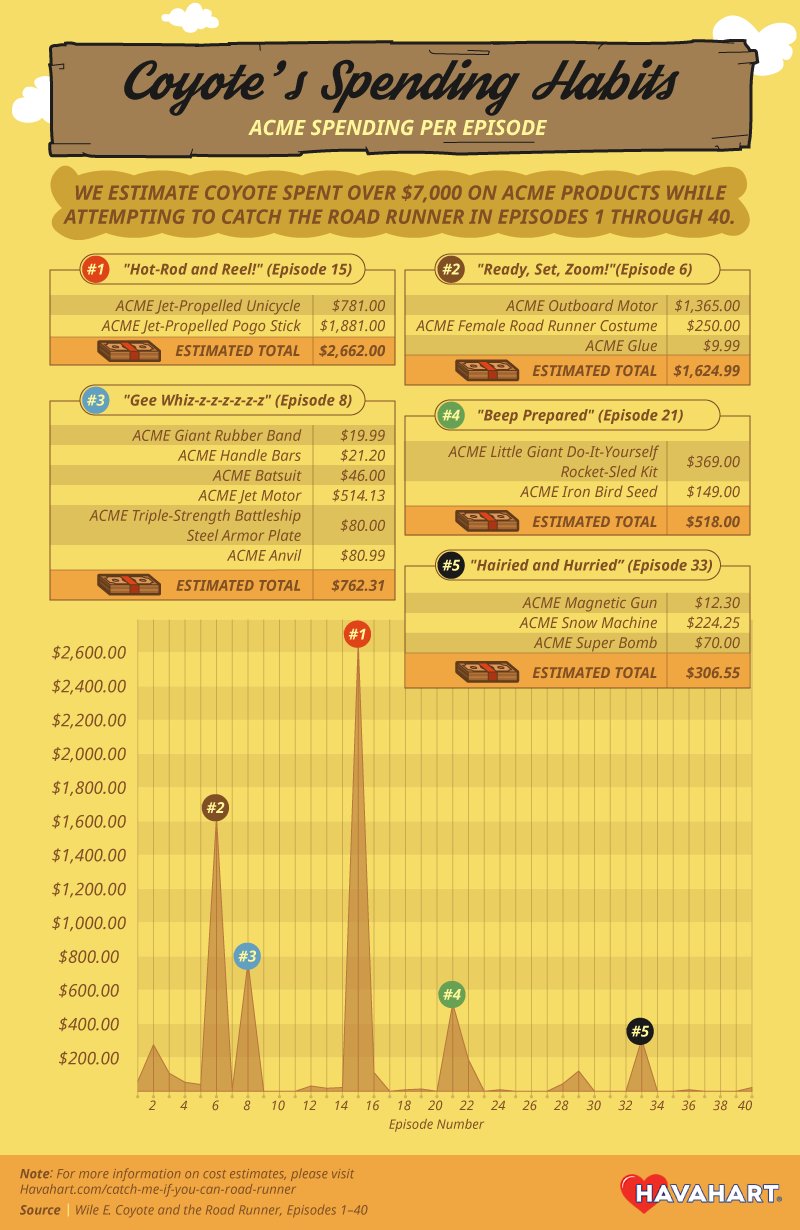 The presence of enemies like the Road Runner (or pests like raccoons or possums, for the rest of us) can be infuriating. Under the right circumstances, you might be willing to try just about anything to get rid of them, including some of the wacky tactics employed by Wile E. Coyote.

By our estimation, in today’s market, Coyote would have spent more than $7,000 on anvils, bombs, traps, and props manufactured by ACME in his attempts to catch the Road Runner over the course of the show’s history. In episode 15, “Hot-Rod and Reel!” the Coyote probably spent over $2,600 on two jet-propelled items: a unicycle and a pogo stick. These funds may have been better spent relocating.

You may not want to spend thousands of dollars to try and remove pests like moles, groundhogs, or raccoons from your home – or use violent methods like the many ACME explosives employed by Coyote in an unsuccessful effort to capture the Road Runner. Thankfully, we’ve got a solution that will not only cost you less but also will be more successful.

At Havahart, we help you trap and repel animals from your home or yard safely and efficiently. Our tips and products are designed to keep unwanted creatures out of your yard and home without harming them or the environment. Many of our repellents are USDA-approved and compliant with organic gardening practices, meaning you won’t have to worry about their lasting impact after the job is done. Visit us online at Havahart.com today to learn more.

For this project, we watched all 40 episodes of “Wile E. Coyote And the Road Runner.” While watching, we tracked a variety of data points, including the number of traps, devices, and outcomes.

We also wanted to determine just how much Coyote would have spent purchasing each ACME product. To do this, we used online retailers to determine an estimated or average cost. Obviously, estimating the costs of “exploding tennis balls” and “jet-propelled skis” is a little ambiguous – when doing this, we added the average price of a tennis ball to the average cost of common fireworks, or we looked at the cost increase for “jet-propelled” items versus their counterparts, such as a kayak versus a jet-propelled kayak.

Want to share the data on “Wile E. Coyote and the Road Runner” with your audience? Feel free to do so for noncommercial purposes. We just ask that you give your readers a link back to this page, so they can read more about the project.