Driving an average of over 13,000 miles a year, American drivers witness plenty on their commutes. Heading down the road at 40, 50, or even 60-plus miles per hour, it’s also one of the last places you’d want to encounter furry friends. It’s a serious safety concern that claims both human and animal life, but we rarely stop to consider the scale of the issue. In a given year, there are over 260,000 crashes involving animals accounting for 12,000 human injuries, and over 150 human fatalities.

To avoid saddening statistics like the ones above, it’s important we remove wildlife as safely as possible from roadways where they may be injured and put drivers in dangers as well.

How often are we experiencing animals near our roadways, shoulders, and medians? Do we all use the same tactics to avoid these creatures? Are their areas of the United States where accidents involving animals are more likely? Read on to find out the answers to these questions, and learn how over 1,000 fellow Americans feel when they’ve had a run-in with an animal on the road. 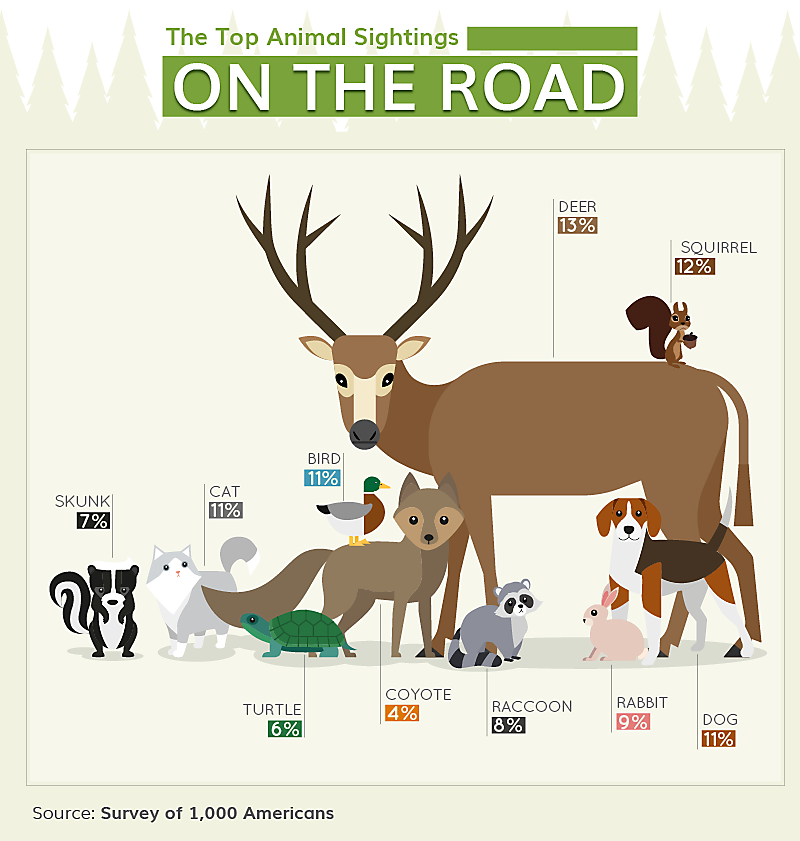 As there are over 30 million deer in the United States, it may not be a surprise that they were the most commonly spotted animal by respondents. While they may be majestic to look at, accidents with deer are costly. Collisions involving animals account for $4 billion annually.

Some of the other popular animals seen were squirrels, cats, dogs, and birds. Helping ensure these animals stay safe on the road today and tomorrow, especially with the advent of driverless cars, will be a challenge, according to researchers. This is due to the reality drivers face when they spot an animal on or near the road and having to guess what they should do next. Being attentive is the first step to helping keep the roads clear for all the critters we come across.

According to the Wildlife Collision Prevention Program, there are steps you can take to ensure you and the wildlife stay safe: 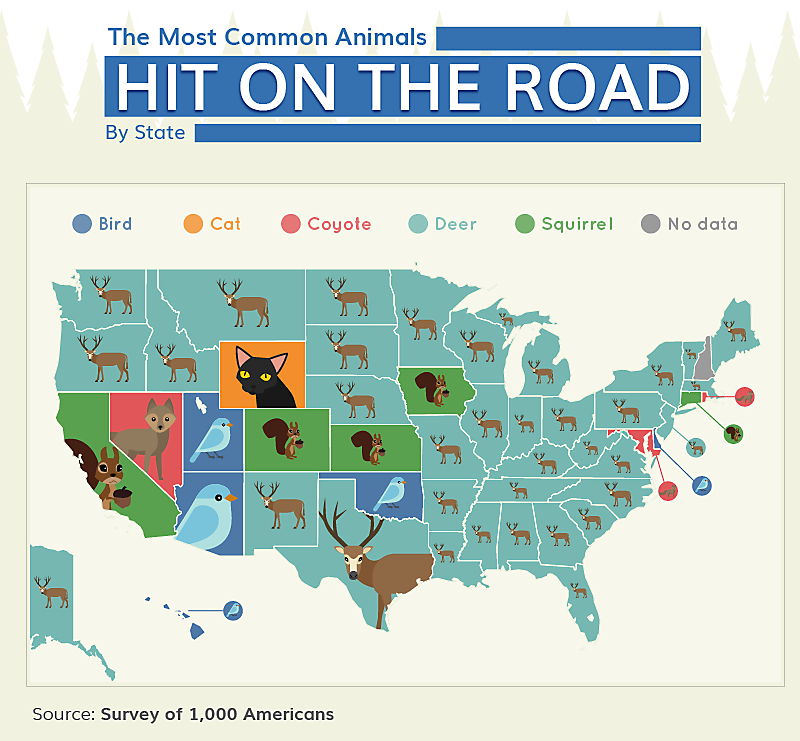 In over 70 percent of the 50 states, the most commonly hit animal on the road is the deer. From some of the most isolated states, like Alaska, to some of the sandiest, like Florida, deer lead as the top victim of motorists more than any other animal. In five states – Hawaii, Arizona, Utah, Oklahoma, and Delaware – believe it or not,  birds are the most struck creatures by motorists. In 2014, it was reported that over 340 million birds were killed on U.S. roadways each year. According to USA Today, higher speed limits and wider roads in rural areas have contributed to an uptick in bird fatalities. Not all animals have to be on the ground to be hit; low-flying birds, even big ones like barn owls, are susceptible to being struck by a fast-moving vehicle.

There were at least two states where coyote and squirrels were the most commonly struck animals, but only one state, Wyoming, led with cats. This is a state that amassed over 12,000 motor vehicle collisions with animals between 2011 and 2015. These crashes resulted in just over 20 human casualties since 2006. 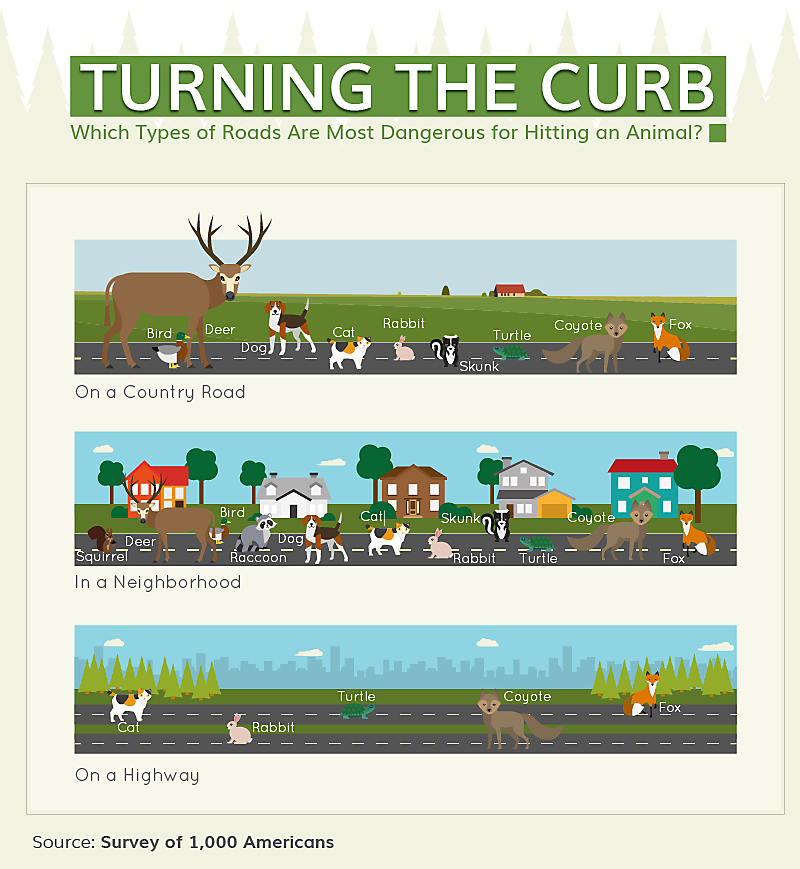 Squirrels were the most likely animal to be struck by our respondents. It’s dangerous for squirrels in any location as everywhere you’d expect them to be – neighborhoods, country roads, and highways – were the top locations where motorists hit these creatures.

Neighborhoods and country roads proved to be combat zones for almost every creature. Birds, deer, dogs, cats, rabbits, and skunks were all struck more often on these roads.

SAVING AN ANIMAL LIFE BY SWERVING, STOPPING, OR GETTING LUCKY 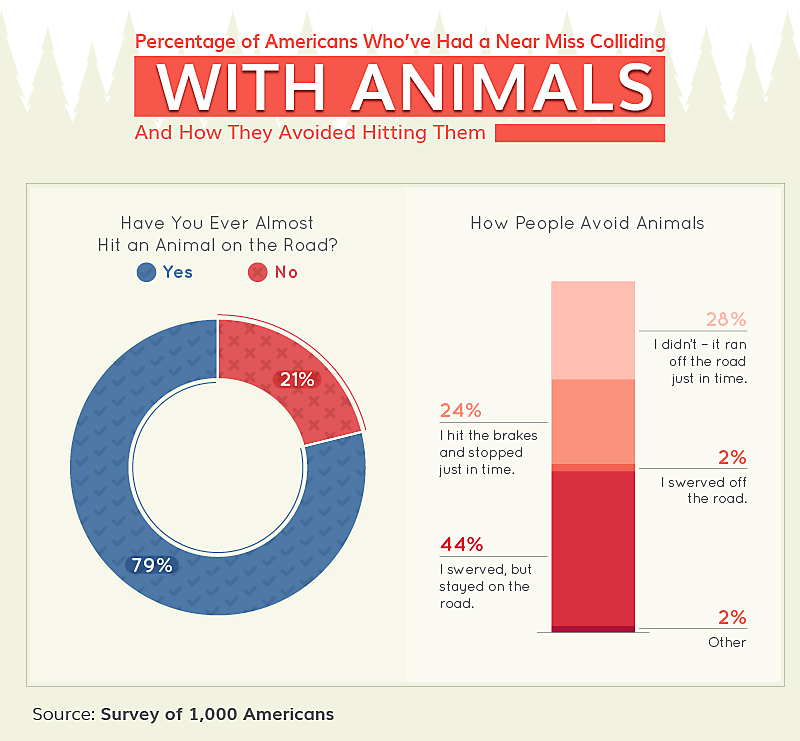 No one wants to strike an animal. Not only is it scary for the driver and passengers, but it can also be heart-breaking. Most drivers do whatever they can to avoid hitting animals on the road, but in that split second, they are faced with making a difficult choice.

Most drivers – almost 80 percent – reported having had a “near-miss” moment with an animal on the road. This means many of us have been faced with the harrowing experience at least once, torn between four or five different reactions, with only a split-second to make a decision. Decide correctly, and the animal is safe – and you and those in your vehicle should walk away from the scene. Choose poorly, however, and it could cost not just money, but the lives of animals and loved ones.

What did the majority of those people who experienced a “near-miss” decide to do? Close to 45 percent swerved (but stayed on the road) to avoid the animal. Beyond that, the decision to do nothing came in next, likely hoping for (and thankfully seeing) the animal run off the road. Those who didn’t choose either of those options ended up hitting their brakes to avoid a collision (24 percent), swerving off the road (2 percent), or employing another tactic to avert an accident (2 percent). 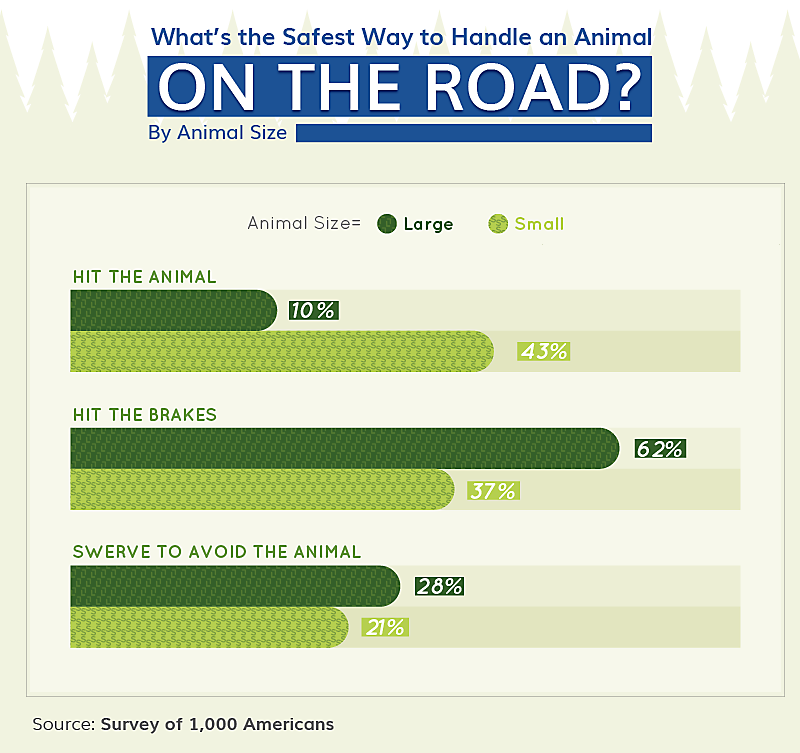 When it comes to encountering animals on the road, it’s possible to come across both small (dogs, squirrels, rabbits) and large (bears, deer, moose) creatures. Given the disparity in size, there are different schools of thought when it comes to safely avoiding one of these species on the road.

Over 40 percent of the 1,000 Americans surveyed believed hitting a small animal was the safest way to avoid an accident. It is not the ideal situation; no one wants to injure or kill a small animal, but swerving could ultimately lead someone to lose control of their vehicle. A resulting crash may injure pedestrians or other motorists or, worse, cause loss of life.

It’s unfortunate, but hitting an animal may sometimes be the best way to protect yourself, according to law enforcement officials. This is even more true with larger animals, such as deer, where the average car repair can run close to $3,000 or more depending on the vehicle. However, less than 10 percent of people would opt to hit a larger animal. Officials also advise hitting your brakes if no one is behind you, and it’s safe to do so. Over 60 percent of our respondents said they preferred this solution when it came to an animal of greater size. The best case scenario would be to avoid injury to both yourself and the animal, of course, but sometimes that option isn’t available. 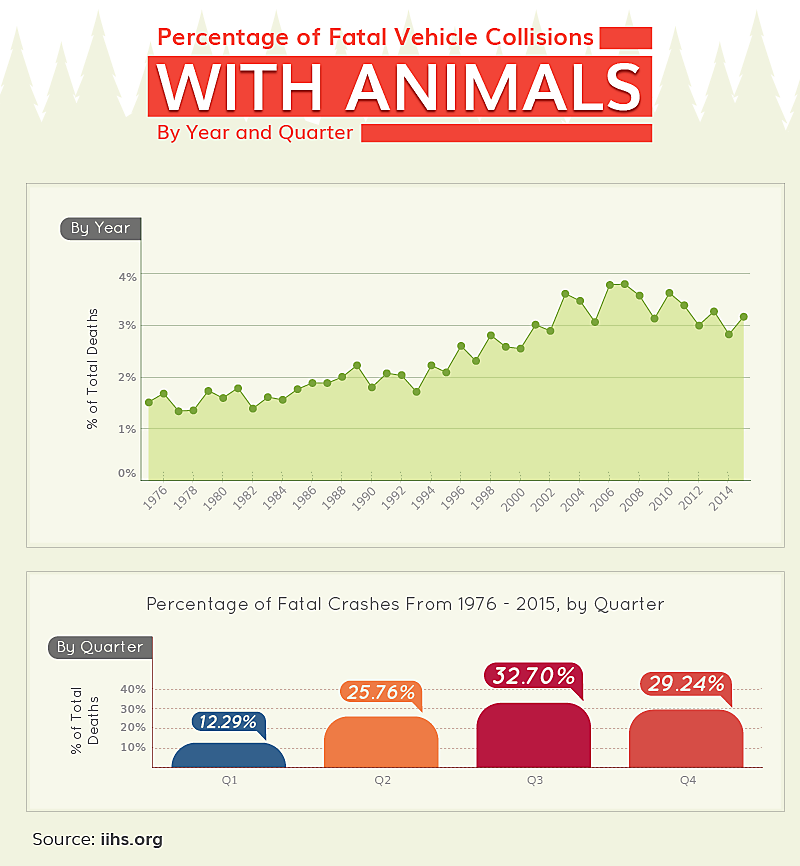 Almost 6,000 deaths have been attributed to a motor vehicle crash involving an animal since 1975, according to the Insurance Institute for Highway Safety (IIHS) and Highway Loss Data Institute (HLDI). Over this 40-year period, the number of deaths in a single year peaked during 2007, when 223 people were killed in these incidents – almost 4 percent of the total fatalities recorded. Since 2010, no year has seen more than 200 deaths as a result of motor vehicle collisions with animals.

Most of these animal-related deaths occurred between the months of July, August, and September – the third quarter of the year. Every year during this span, almost 50 people across the United States were on a drive, collided with an animal, and never made it home. While nearly a third of the deaths resulting from a motor vehicle collision with an animal took place in this quarter, it was followed very closely by the fourth quarter – October, November, and December. 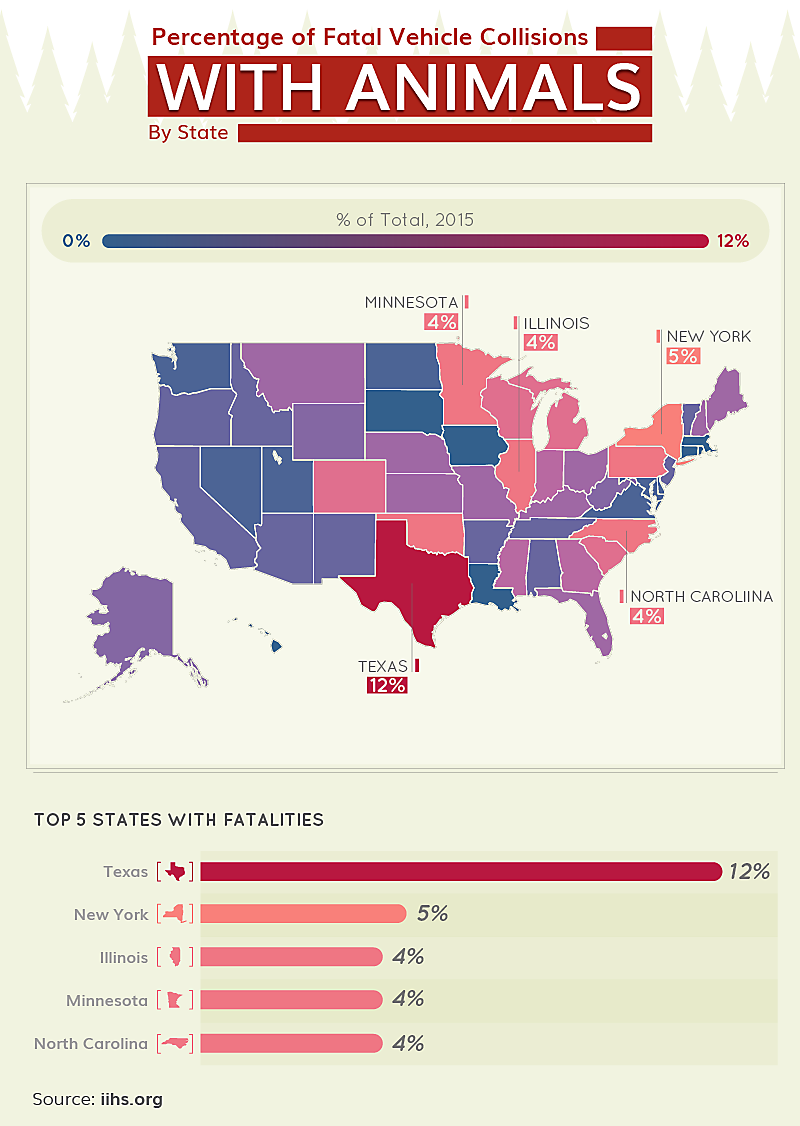 Illinois, North Carolina, and Minnesota recorded 4 percent each of all fatal crashes that involved an animal.

Though these percentages are small, they can be reduced even further by taking preventative measures when it comes to wildlife on the road, including safe removal, which will protect both the human and animal. 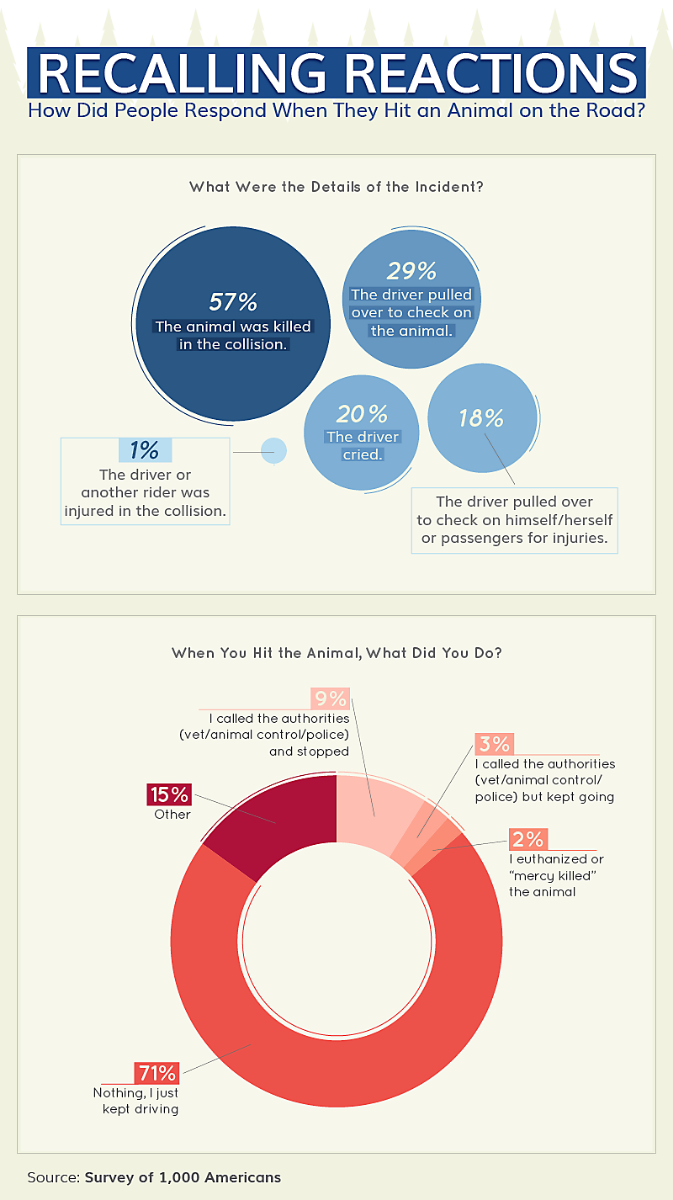 According to our survey participants, the animal in the road was killed in almost 60 percent of collisions. More than one-quarter of respondents (29 percent) said they pulled over to check on the animal to see if anything could be done. At least for the humans involved, only 1 percent had a driver or rider who was injured as a result of hitting an animal.

After hitting an animal, over 70 percent kept following their GPS or equivalent directions to get to where they needed to be. With 20 percent of people reporting they cried after hitting an animal. Nearly 9 percent took the time to call the authorities – who would potentially be able to either rescue, euthanize, or dispose of the animal – and waited for them to arrive. This was three times more likely to occur than the times they just called the authorities and continued driving away. 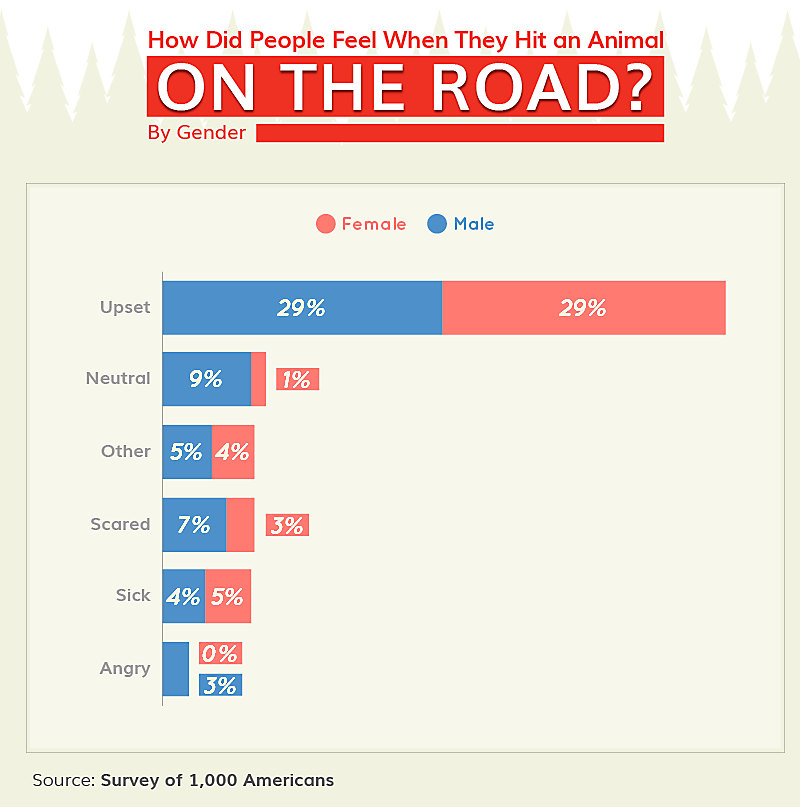 It’s both unsettling and heartbreaking to hit an animal while on the road. Practicing safe driving is important, but accidents can happen to the best of us. When an animal was involved, nearly 30 percent of both men and women felt understandably upset.

WHAT CAN YOU DO TO PREVENT FATAL ANIMAL COLLISIONS?

There are a few things you can do to avoid a collision with an animal while driving, but there is plenty you can do off the road to make the roads safer for drivers and wildlife.

You can support efforts that push for wildlife conservation with limited highway construction.

You can also remove the animal from the roadway if it will not put you or the animal in danger, or call your local animal control to assist with the removal and rehoming of the animal.

For domestic animals, such as dogs and cats, spay and neuter to help control population spikes.

Your local council members, Congress members, and Department of Transportation can even be called to ensure correct wildlife crossing signage is posted where it is needed. Lastly, you can support construction efforts to create wildlife crossing bridges like in Arizona.

Motor vehicle collisions involving animals and the fatalities associated with these incidents are no laughing matter. While these accidents cause around 200 deaths a year, it is also about the amount of injury and damage that occurs to both humans and animals alike. Depending on what state you live in, such as Texas, or where you’re driving, such as neighborhoods or country roads, you may be more likely to be in a situation where striking an animal with your car could happen. Havahart is helping to control animal populations in a caring manner, and an animal population that is under control means potentially fewer animals in harm’s way.

Being attentive while driving could help to save an animal’s life, not to mention your own.

We surveyed 1,000 people in the United States about their experiences with wildlife on the roads. Additionally, we sourced fatal crash data from iihs.org.

If you wish to share the findings of this article with your own audience, don’t be an animal, please link back to this page to give the author proper attribution.