What Is Eating Your Garden? 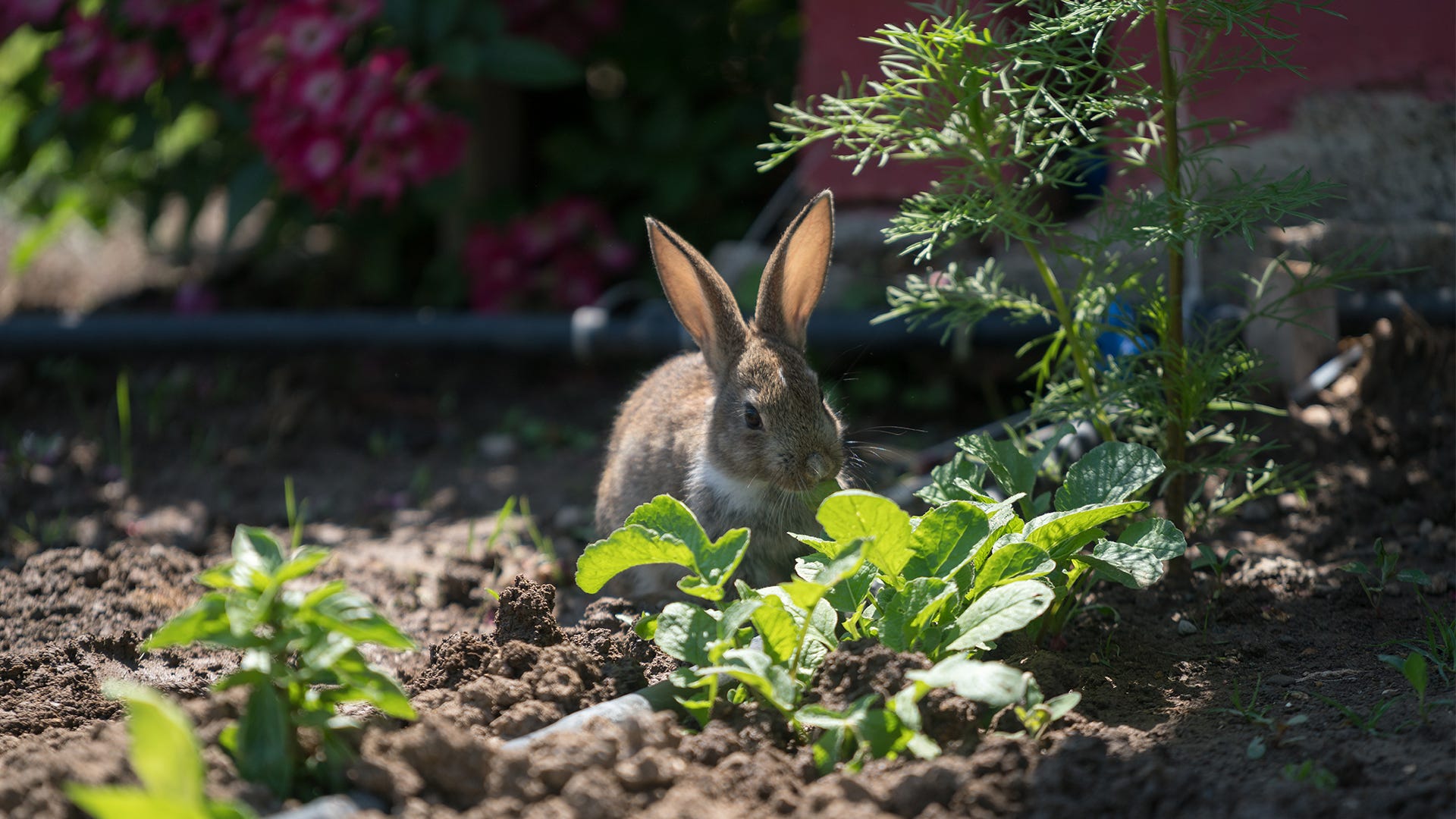 Are groundhogs, rabbits, deer, and other nuisance animals chomping on your plants? Here are hints for figuring out which critters are to blame and strategies for repelling them from your ornamental and food plants.

Damage: Seedlings you just transplanted are pulled or dug up.

Suspects: Squirrels, cats, and skunks like to get their paws dirty.

Clues: In springtime, squirrels often displace young plants or leave behind the remains of what they’ve sampled. A cat does harm when using your freshly dug dirt as a litter box, and a skunk leaves behind a bit of its trademark aroma.

Solutions: Covering the area with chicken wire or hardware cloth lets young plants get a head start before squirrels and cats can claim them. Use a granular animal repellent to create a repelling barrier around your newly planted garden. A motion-activated sprinkler can be used to frighten these water-averse animals and condition them to stay out of any area.

Suspects: In this case, stereotypes are accurate because rabbits can’t help themselves around these tender edibles.

Clues: Distinctive 45-degree-angled clippings are this animal’s calling card. Another hallmark of their nocturnal visits: round droppings. During spring and summer, rabbits prefer greens, whereas winter calls for a woody diet.

Solutions: Trim vegetation along fencerows and brushy areas, since rabbits don’t like to stray far from cover. Irritate a rabbit’s keen sense of smell and taste by spraying a liquid repellent directly on plants they’ve been nibbling. You can also guard the whole bed by sprinkling a granular repellent around the perimeter.

Suspects: Deer are charming and lovely in the wild, but they aren’t guests you want to invite into your yard.

Clues: Because they yank off vegetation, deer leave behind rough-cut stems. They feed at night, so you most likely won’t see them, but their split hoof prints and distinctive oblong droppings left behind will tell you what was munching on your garden.

Solutions: Spray liquid repellent that targets deer’s sharp sense of smell and taste on plants they have been chewing on, such as shrubs and vines. To protect entire garden beds, place weather-proof deer-repelling stations (filled with potent-smelling granules) in and around your garden early in the season—these last all season-long. Prevent deer from entering certain areas by installing electronic repelling posts. These posts deliver a harmless mild shock, which quickly sends them away.

Damage: Chewed-off roots cause the visible part of your plants to die

Suspects: Voles and gophers both go underground in search of food from your garden, chewing on flowering bulbs, carrots, potatoes, and other nutrient-rich roots.

Clues: Crescent-shaped mounds of dirt that are displaced by tunnel digging and burrow holes that are plugged with soil are the work of gophers. Voles, on the other hand, keep entrances open and create aboveground paths by running the same routes.

Solutions: To deter voles, keep the area around beds well mowed and weeded—voles don’t want to travel out in the open, where they have no protection from predators. A granular repellent made with castor oil, which has a scent and taste the little diggers do not like, sends both gophers and voles in search of other food sources.

Damage: Fruits and vegetables are chewed on

Suspects: Groundhogs, raccoons, and opossums have a taste for homegrown produce.

Clues: Groundhogs consume enormous amounts of food—up to 1½ pounds every 24 hours—and leave large marks with their incisors. They’re active during the day, unlike raccoons and opossums. Bent corn stalks with the ears eaten suggest a raccoon; possums like berries, grapes, and tree fruits, and they tend to leave behind a mess.

Solutions: Start by clearing the ground of fallen produce so you’re not advertising your garden’s output. A fence that’s at least 1-foot deep and 3- to 4-feet high helps thwart groundhogs and opossums, though raccoons are adept at climbing and finding ways around obstacles. Sprinkle a granular animal repellent around the perimeter of areas you wish to protect. To guard larger areas, set up a motion-activated electronic repellent, which sprays a stream of water when the pests pass by.

Damage: Small holes appear in tomatoes, cucumbers, and other crops

Suspects: Birds benefit your garden by feeding on destructive insects, but that doesn’t make up for them pecking at your nearly ripe harvest.

Clues: Holes poked in juicy crops, such as tomatoes and cucumbers, are caused by birds seeking moisture.

Solutions: A combination of devices, such as Mylar streamers and motion-activated repellents, scares birds better than one tactic alone. To keep your feathered friends around eating insects while preventing them from hitting your crops, drape lightweight netting over ripening plants until harvest time.