The opossum is a successful scavenger, thanks to its adaptability and excellent immune system. Of the 100+ opossum species in the world, the most common and recognizable in the United States is the Virginia opossum. Below, explore facts about the Virginia opossum including its habits and how to identify damage. 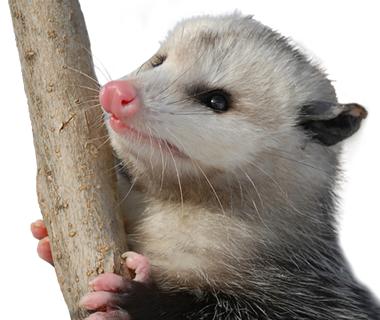 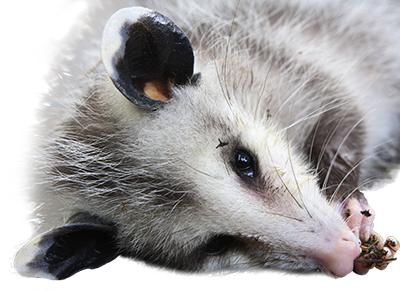 Many injured opossums have been killed by well-meaning people who find a catatonic animal and assume the worst. The best thing to do upon finding an injured or apparently dead opossum is to leave it in a quiet place with a clear exit path. In minutes or hours, the opossum will regain consciousness and escape quietly on its own.

Virginia opossums inhabit Central America and the eastern half of the United States, as well as parts of the west coast, where opossums had just been introduced during the Great Depression. 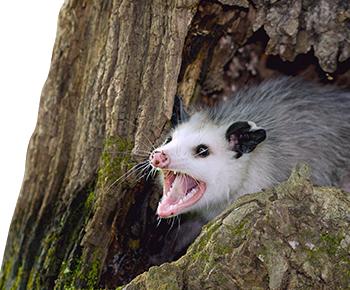 While opossums prefer deciduous woodlands with nearby sources of water - like streams or swamps - they are extremely adaptable and succeed in a variety of habitats and climates. The most important elements in a possum's home range are food, water and shelter.

Opossums are opportunistic omnivores that eat a wide variety of animal and plant matter. While they're mainly scavengers - feeding on dead animals and plant matter - they also love insects and occasionally hunt small animals like chicks and snakes.

Some of opossums' favorite foods include:

Activity: Opossums are nocturnal - active mainly after dark. Although they do not hibernate, they are often less active during the winter. Opossums tend to be solitary animals and live alone when they are not breeding.

Reproduction: Between the months of January and October, opossums breed and give birth to up to two litters of 4-8 young - or joeys - each. The gestation period of a possum is about 13 days, after which time the joeys are born and must immediately claim one of 13 nipples inside the mother's pouch. Joeys remain inside the pouch for about 50 days, after which time they begin to exit the pouch and spend time on their mother's back. After about 100 days, young opossums split from their mothers to find their own home ranges.

Defense: When threatened, an opossum will hiss and show its teeth to try to ward off a predator. If this doesn't stop the predator from attacking, the opossum will pretend to be dead, falling to his side, curling up and opening his mouth. Some refer to this as "playing possum", and this defense mechanism often results in a predator walking away.

Skills: Opossums are skilled climbers, thanks to their opposable rear thumbs and long tails that are designed to wrap around branches. They are also great swimmers, although they prefer to travel on land. 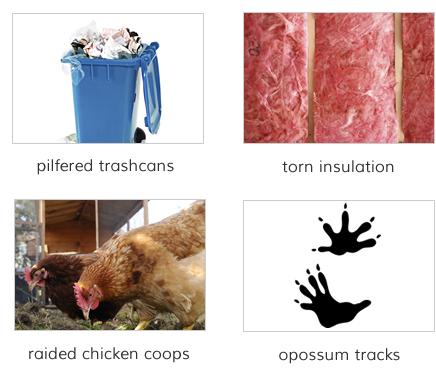 Though opossums aren't aggressive in nature, they are opportunistic and resourceful creatures that eat what they can find and take shelter where they see fit - even if it's inside your home. It is important to identify signs of opossum damage early.

Signs of damage include:

Due to an opossum's low body temperature and successful immune system, it's very rare for one to carry rabies.

In northern regions, opossums often have abnormally short tails - the ends are lost due to frostbite.

The Virginia opossum has more teeth than any other North American Mammal - 50, to be exact.

The Virginia opossum is the only marsupial that inhabits the U.S.

A study conducted by a University of Florida researcher traces the existence of opossums as far back as the extinction of dinosaurs.

Although many throughout North America refer to native opossums as "possums", the term "possum" technically refers to a classification of marsupials living in Australia, New Guinea and Sulawesi.