Moles are unique creatures that spend their lives underground, constantly digging to hunt and navigate under the earth's surface. Their digging habits notoriously destroy lawns, gardens and golf courses, frustrating home and business owners. Below, learn more about their habitat, diet, and how to identify mole damage. 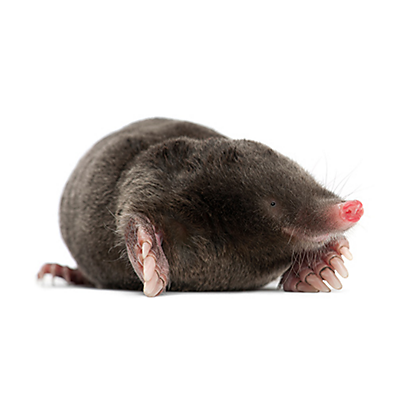 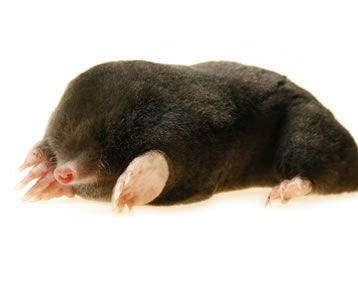 Average Lifespan in the Wild: 3-6 years 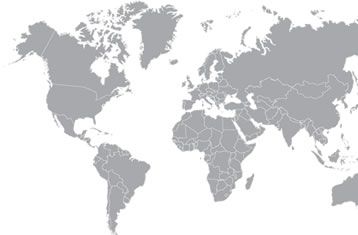 Moles are found throughout most of North America, Europe and Asia. There are seven different species in the continental United States - the most common species being the Eastern mole. 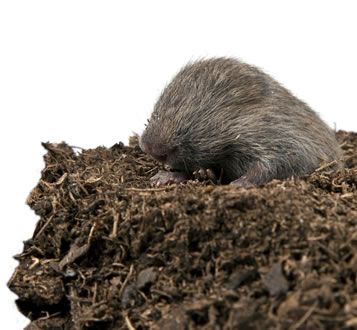 Fossorial by nature, moles live and forage underground in broad systems of burrows and tunnels. Because they prefer to dig in soil that is loose and moist, they are most abundant in fields, meadows, orchards and forests with plenty of shady vegetation that provides this type of underground environment.

One solitary mole's range can extend up to 2.7 acres. A mole's underground territory consists of large, complex burrow systems with separate areas for living and for hunting.

Moles are insectivores, eating 70-100% of their weight in worms, grubs and insects each day. In order to hunt down their ground-dwelling prey, moles constantly excavate, leaving behind a series of tunnels. This digging requires a tremendous amount of energy, which may explain the mole's voracious appetite.

A mole's diet consists of large amounts of small invertebrates like:

Activity: Moles are active throughout the daytime and nighttime. Although moles are active year-round, they tend to exhibit less foraging activity in extreme heat or cold. They are most active after periods of rain or watering, when the soil texture is ideal for digging.

Reproduction: Mating season begins in late winter. Gestation lasts about 42 days, after which time females give birth to 2-5 young. Baby moles become independent from their mothers after about a month of age.

Social Interaction: Most moles are solitary animals, only socializing when they reproduce. The star-nosed mole is the only species thought to live in colonies. Within the other species, mole populations may range from 1 mole per 6 acres to up to 5 moles per 1 acre.

Digging: Moles spend most of their time digging tunnels in search of worms and grubs to eat. When digging these tunnels, moles tend to follow manmade edges like fence lines or building foundations. Periodically moles will pause to push the loosened soil to the surface, resulting in the creation of molehills. 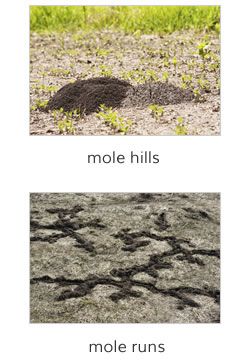 Some homeowners find moles beneficial because they prey on many destructive insects and their digging helps to aerate the soil. However, many feel that the damage moles cause to their lawns outweigh any benefits they provide.

Signs of mole damage include:

Moles can dig tunnels at a rate of up to 15 feet per hour.

Although moles may resemble mice and rats, they are not rodents. Instead they are insectivores - more closely related to bats.

Unique adaptations in the hemoglobin of moles allow them to survive underground with low levels of oxygen and high levels of carbon dioxide.

In cold and/or dry weather, moles will often dig deeper into the ground, following their food source.

A mole's saliva contains a toxin that paralyzes worms, allowing them to gather and store food for consumption later on.

Before eating a captured earthworm, a mole may squeeze the worm between its forepaws to release the unwanted dirt from its gut.

Moles are some of the only animals that can smell in stereo. This means they can detect odors immediately as well as determine the direction from which they are traveling. Smelling in stereo is a great advantage for moles, because it allows them to quickly and accurately locate food and predators.

Moles are often blamed for the eating of roots and seeds, but moles are insectivores that almost never eat plants or plant matter. Other plant-eating animals like voles will use the hunting tunnels left behind by moles, and generally they are the true culprits. However as a result of tunneling, moles can dislodge plant roots and kill grass.