While dogs are some of the most commonly domesticated animals in the world, a large percentage of dogs are living in the wild - as either feral or stray. Learn general facts about dogs below, including the difference between pet, stray and feral dogs, as well as what they eat in the wild and how to identify damage. 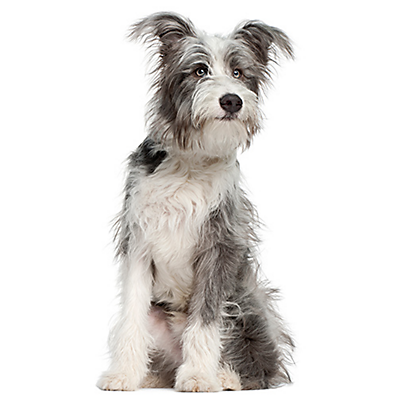 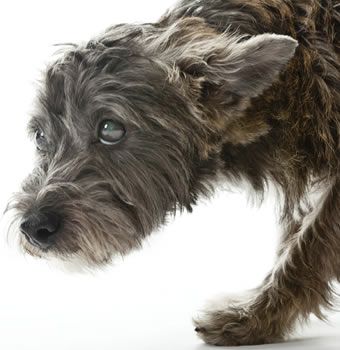 There are over 150 recognized dog breeds, which vary in genetic traits such as size, temperament, skills and appearance.

Beyond the classification of breed, dogs also may differ in learned traits such as personality, preferred habitat, diet and habits, based upon the way in which they are raised and socialized.

raised by humans from birth

living in the custody of humans

socialized and generally friendly toward humans

living in the wild due to natural disaster, abandonment or accidental separation from owner

were once socialized; may be approachable by humans

born and raised in the wild

have little to no human contact; humans simply a part of their environment

considered human-independent, although they may indirectly benefit from human scraps or manmade shelter

It's important to understand the difference between a pet, stray and feral dog, especially when attempting to take care of or control neighborhood dogs. Because of their varied human socialization skills, dogs of each group are likely to respond differently to care and control methods. 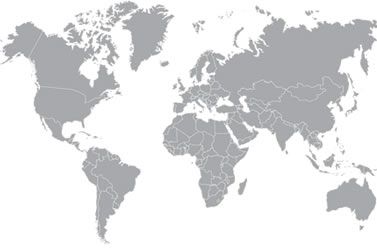 Dogs can be found throughout all continents in the world, except for Antarctica.

In the wild, dogs succeed in habitats that provide ample food, water and cover, like forests and brush lands. For shelter, some dogs will dig burrows, but most of the time they will use manmade cover or inhabit abandoned fox or coyote dens.

Primarily carnivores, dogs feed mostly on animals and animal matter. However unlike cats, dogs are not obligatory carnivores, meaning they can digest a variety of plant-based foods as well. Domesticated pet dogs generally eat "dog food" consisting of a mix of animal products, grains and vegetables.

Some favorite food sources of feral dogs include:

Activity: In the wild, dogs tend to be most active at twilight. Pet dogs are generally more diurnal, sharing a sleep cycle with their owners.

Reproduction: Reproduction in dogs usually occurs about once per year. A dog is able to begin reproducing between about 6 to 18 months of age, depending on its breed. The gestation period for a dog is about 58-68 days, after which time a female gives birth to a litter of one to twelve puppies.

Social Interaction: Known famously as pack animals, wild dogs live together in tight knit family groups, in which a hierarchy of dominance is established. The leader - or most dominant of the pack - is referred to as the "alpha".

Communication: Body language, vocalizations (barks, howls), eye contact, and scent marking are among the many ways in which dogs communicate with each other and/or with humans. 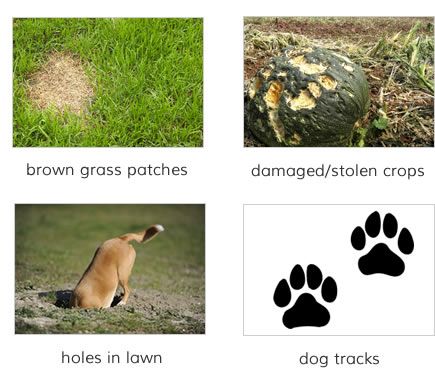 Signs of dog damage include:

Dogs - especially unvaccinated and feral dogs - may carry diseases transmittable to humans and other pets. In fact, dogs are the leading cause of rabies in humans.

Some additional diseases dogs can carry include:

These diseases or disease agents are often transmitted via bite, tick transfer and/or direct contact with infected dog waste. It's important to note that vaccinations are available - and often times required - for immunizing your pet dog to these illnesses.

The intelligence of an average dog is comparable to that of a 2-year-old child.

While dogs are not completely colorblind, they cannot distinguish between reds and greens.

Dogs have a superior sense of smell, helping them to seek out predators, prey, other dogs, signals and more. Dogs possess bout 40 times the number of olfactory sensors as humans, giving them a sense of smell that’s 100 times greater.

The moisture of a dog's nose helps the dog to better detect odors.

Research has shown that dogs can smell certain signs of disease, accurately diagnosing cancer in many individuals.

To cool themselves off in warm weather, dogs pant and sweat from their paws.

Humans have been domesticating dogs for over 10,000 years.