What to Do with a Rabid Animal

Whether the mention of rabies stirs thoughts of the tragic, heroic title character in Fred Gipson’s Old Yeller or the eponymous savage from Stephen King’s Cujo, this devastating disease is sure to evoke an emotional response. And well it should, as it is still primarily treated only through preventive methods, except for a battery of shots available for infected humans. If exposed to the disease, animals that were not vaccinated must be quarantined until it can be determined whether they will exhibit symptoms or not, but aside from vaccination there is no known cure.

Rabies is a disease that affects the central nervous system and is caused by a virus that can be transmitted to humans from animals that have been infected with it. The virus travels to the brain, then to the salivary glands for “shedding” to the next host. It results in encephalitis (an inflammation of the brain) and death.

Following an incubation period, during which time the disease cannot be transmitted to another, one of two forms of the disease will manifest: the paralytic form or the furious form. The paralytic (or “dumb”) form is less threatening to those near the infected animal, which acts listless and weak, whereas the furious form is characterized by aggressive behavior, making the animal very dangerous to be around.

An infected animal may exhibit signs of either of these forms, or it may shift from one form to another, making it unreliable to handle safely. According to the World Health Organization, the furious form “is most common” and accounts for “approximately 80% of cases” (though for human cases it is more like 70%).

After incubation, there is a brief stage where an animal begins to behave differently. This period is known as the prodomal stage, when symptoms begin but are not yet severe. It is during this period when a tame animal might act aggressively and a nocturnal animal will venture about during daylight. This leads within a few days to one of the two forms of rabies, at which time symptoms grow more intense.

When paralysis sets in, death will follow shortly afterward. For rabies in humans, symptoms may include weakness, fever, headaches, pain, hallucinations and even a fear of water.

How Rabies Is Transmitted 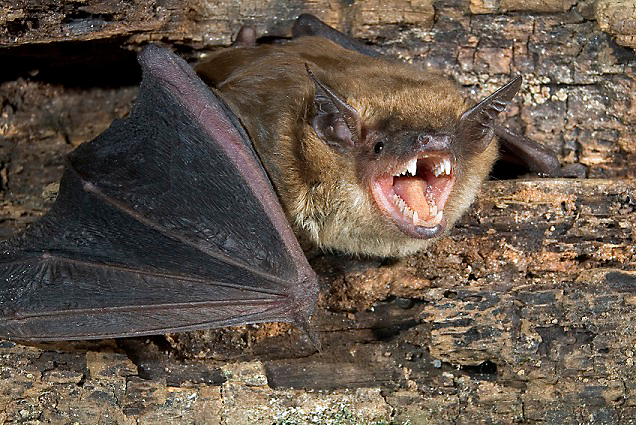 The rabies virus lives in the saliva of a host animal but does not live long after being exposed to the air. Rabies is transmitted when an infected animal’s saliva enters a wound. This wound can be an existing one or, as is more often the case, a fresh one made by a bite from the rabid animal.

Any mammal may contract rabies, but according to the Centers for Disease Control and Prevention (CDC) rodents, rabbits and hares “are almost never found to be infected with rabies and have not been known to transmit rabies to humans.” The leading wild animals that contribute to the spread of this disease in the United States are:

People tend to mistake the defense tactics of the opossum for rabies, but their body temperature is actually too low for the rabies virus to thrive in, making them highly unlikely to be candidates for rabies. They are simply terrified and trying to scare you away.

What to Do If Bitten

If you have been bitten by an animal that you suspect has rabies, do not delay. Post-exposure treatment will be effective only if symptoms have not yet manifested; once symptoms appear, the virus has already reached the brain and cannot be treated. Wash the wound with antibacterial soap and proceed to your doctor.

Rabies treatment for humans is not the scary “big needle in the stomach” type that terrified people up until a few decades ago. The treatment given after a bite involves infiltration of an immunoglobulin at the wound site plus intramuscularly (unless the patient has already had a rabies vaccination), followed by a series of injections of the rabies vaccine. Adults receive these shots in the deltoid and children receive them in the thigh.

Pets that are bitten are quarantined if their vaccination is not up to date, and unvaccinated ones are recommended to be euthanized.

The Best Protection for You and Your Family

It should be a general practice to avoid wild animals normally, but be especially cautious around any that are acting out of the ordinary, such as coming out in the daytime, approaching humans fearlessly, and wobbling in a “drunken” manner.

Since dogs are often left outside unsupervised, you can’t always rein your pet to protect it. But what you can do is make sure that its vaccinations are up to date. (Check with your veterinarian if you are unsure.) This is the best thing you can do for your pet and your family, as WHO statistics show that over 95% of the people who have died from this disease received the virus from a domestic dog. Aside from your own safety, making sure it has been vaccinated is the only sure way to save your pet’s life if it should be bitten by a rabid animal.

Report All Animals Suspected of Rabies

Help keep authorities informed of the current level of rabies activity in your area by reporting any animal you encounter that is acting strangely, especially if it is aggressive and a threat to anyone who might pass by.

Do not try to approach or capture it yourself, but leave this for the professionals to do. And if you use live traps like the ones by Havahart® and find that you have unwittingly caught an animal that might be infected, don’t try to approach the cage or release it. Call your local health department instead. Stay safe!